“How To Bite a Mosquito Back?” – The Tweet that went Viral in no time

No one likes mosquitoes, and their bites can be quite annoying. However, it keeps happening summer after summer and no one seems to be able to avoid these bites. There are sprays to keep mosquitoes away, as well as shelters to cover yourself under, when these insects are out to get you. But none of them will solve the problem completely.

Naturally, people all over the world started to focus on a revenge mechanism. What if we could bite these mosquitoes back and give them a dose of their own medicine? We have teeth, we are the evolved and smarter species! So, we should definitely be able to get them!

Let’s look at how this virtual wave started and if you can actually bite a mosquito back!

How it all started..

The summer of 2019 was the time frame when people declared war to mosquitoes. For once, they decided to fight back and not be sure victims anymore. You probably came across a selection of tweets, memes and other social media posts that were hashtag-ed #howtobiteamosquitoback.

In July 2019, on the 16th, the twitter account @DickFooDog posted the following “how to bite a mosquito back” tweet on their page at 3:15 in the morning. As they always say, the best questions keep you awake at night, don’t they?

It seems that this tweet is everything people needed to start a revenge plot against those insects that invade our peace one summer day after another. Over 230 000 retweets and 600 000 likes, made this tweet viral in no time, to the astonishment of the account’s owner. However, the twitter account that hosted this viral tweet didn’t change much in terms of popularity. But the tweet definitely took off and made it towards many people worldwide.

From this question, posted as a tweet, many “solutions” (how one can bite a mosquito back), were generated. Some of them are more interesting than others while at the same time, there are a lot of options that seem just too exaggerated to apply.

“How to bite a mosquito back”, the tweet that generated a mass reaction

People react to things or situations they can rely to. And it is almost impossible to not have experienced a mosquito bite in your life. Therefore, when someone wonders about how to bite a mosquito back, it almost seems like they read your mind! In some way they did as mosquito bites are a common discomfort for all of us.

People created memes, some of them cartoon ones while others in a more realistic manner. But all these memes are a comic representation of the general frustration people feel towards mosquitoes and their bites. This is the reason why almost everyone could relate to this now famous tweet.

Truth being told, everyone wants to get back at those little creatures that besides the fact that they can bother you with a high pitch noise they make, they can also bite you and feed on your blood. Have you ever tried to sleep while there was a mosquito in your room? It is basically impossible unless you catch the mosquito or chase it away! No wonder that many people saw some hope in the “how to bite a mosquito back” question…

After this tweet was launched in the virtual world, people even elaborated a method to train mosquitoes. This method is similar to training a dog, yet still very different. It is very simple though, and you can try it at least for fun. All you have to do is get a mosquito toy and bite it in front of real mosquitoes. They might notice what you are about to do to them if they don’t stop bothering you or they might not even notice it. Either way, this is one of those tricks that you don’t know how they work until you actually try them. And if you don’t scare away any mosquito, you will at least generate some laughs among your kids!

Even if this tweet addressed a real question, the solutions regarding mosquitoes still reside in the prevention strategy. Do your best to keep these flying creatures away by using protective sprays, creams and house perfumes. Such items are accessible in almost every store and they come at affordable costs.

We hope that this article satisfied your natural curiosity regarding “how to bite a mosquito back”. Now you should be ready to face the summer days that are to come with their crowd of mosquitoes that will go out to hunt too. If you can’t bite them, you can at least scare them by using the toy method. However, protecting yourself with proper products that keep mosquitoes away is still your best bet!

Finally.. Some ‘How to bite a mosquito back’ – Funny Memes

They were delicious from r/dankmemes

Lmao this is so funny 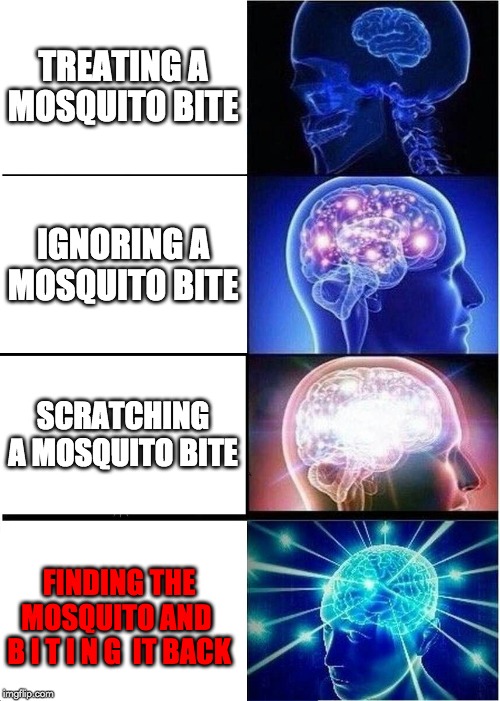 Irina Maria Tracy is a published author, writer, and journalist who lives in Bucharest, Romania. She completed her journalism and mass communication degree from the University of Bucharest and went on to publish some top books in the fiction genre. Some of her top books include 'Haunted Aliens' 'Vampires Rapture' 'Adverbs of Love' etc. Irina also worked as an investigative journalist for a year and even collaborated with a TV channel for a political talk show (Bah TV). She loves writing and has contributed to many top magazines and newspapers such as the 'Story Magazine' 'Curentul Newspaper' and many others.